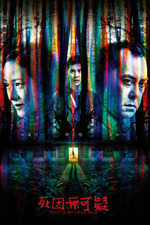 More entertaining than I thought it would be in the sense that I was rooting for our "pure protagonist" and invested in the rabbit hole he found himself entangled within, but ultimately rifled with all the familiar problems characteristic to me of mainstream HK / Taiwan cinema, the two main issues being:

1) shots that exist solely for the sake of "cinematic-ness" (or to show off how much money production had) that really do very little for the film itself in terms of story, mood, or experience;

2) Female antagonists that are presented as cunning, shrewd witches who "have the audacity" to trick men with their evil intentions, and ultimately must be stamped out to restore all that is right with the world

It's not that you can't have female antagonists, but the lack of empathy towards her and the general way she was presented made me very unhappy and uncomfortable. I had previously thought it was difficult to discuss this with HK/Taiwanese who grew up in such a patriarchal world and found no issues with this, but I was happy to discover that more and more people, particularly young people, are alert and aware about this.

And could this film not be a more fitting representation of a regressive mindset towards mental health - where people who are sick are presented as insane, and the good guys try to diagnose them off textbook terms based on broad assumptions instead of understanding?