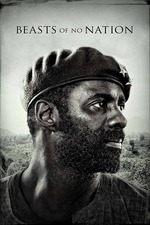 It's a curious thing to watch a film like this - it's not entertainment, but it is something to be consumed in the same way, yet is so utterly different.

As you'd' expect there are plenty of awful things in this, made worse by the knowledge that it's depicted as routine.

Things are depicted without any glamourising and with a sparse sensitivity. Performances were all pretty excellent, even though Idris Elba's giant charisma stood tall.

I felt informed rather than educated after it, and I think that's a good thing.