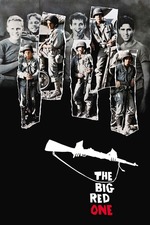 The Big Red One

I hd a few problems with some of the war scenes of general running about and I don't think they were meant to be comedy, but they were risible.

Lee Marvin was predictably great, but the disembodied voices and some pretty ropey acting worked against it. I mean, I get that a war film can be about a journey and you don't need to spell out the horrors, but you do need a decent script and actors to convey some emotional depth - a depth undermined by a hokey voice over straight outta the Wonder years.