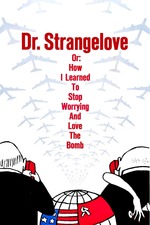 Wonderfully dark, comical and thought provoking, Dr Strangelove is an entertaining phallic-filled critique of the Cold War and the easy death spiral that is possible within our beloved government and military bureaucracies at any time.
The constant clash of contexts via music (“We’ll Meet Again” playing over nuclear annihilation) and characters (sexually frustrated war hawks vs impotent intellectual doves) propels this hilariously written, directed and acted (@Peter Sellers’ three roles) satire to a level I have never seen before.
Not only is this film biting and hilarious, but Kubrick creates tension and stakes that keeps viewers on edge amidst the absurdity.
And finally: shout out to young James Earl Jones who was the best part of the many sequences of switches getting switched on the B-52 Bomber.