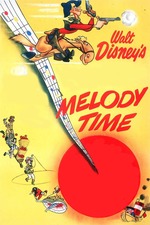 A pretty ho-hum movie that becomes so bizarre it's good during the final segment. There were some good segments previously in the film, including one about a Bumblebee flying around that feels like something out of a video game, but nothing on the same level as what it leaves for the film's grand finale.

The final segment, an adaptation of the popular Pecos Bill myth from (White) American folklore, starts out fairly pedestrian. Bill gets raised by coyotes, becomes a cowboy with his noble stead Widowmaker, and they ride around Texas performing great feats. It's pretty but boring stuff, supplemented by music from country artists like Roy Rogers who are famous for not being Marty Robbins, Johnny Cash, and Dolly Parton (the only good classic country artists in existence).

Not taking kindly to the fact that Sue is trying to steal their man, Widowmaker decides to get rid of her. If the movie was taking place today, they could've just sung Jolene at Sue and hope they get the message. Unfortunately as that song did not exist at the time, Widowmaker is forced to take extreme actions to prevent Bill from ditching them.

And so on the day that Sue and Bill are to be wed, a day on which Sue randomly stuffs the back of her dress, Widowmaker decides to ruin the wedding. Angered at what is taking place, they create such a scene that Sue decides to try and break them. She hops on Widowmaker's back, who immediately tries to buck her off. But Sue doesn't budge, the thing in the back of her dress cushioning her from the impact of Widowmaker's fierce attempts to get rid of her. In spite of the bucking, she has a pleasant ride, even going as far as to reapply her make-up while still on Widowmaker's back. That is, of course, until it happens...

Widowmaker finally succeeds in bucking Sue clear of them, but there's a problem. The thing in Sue's dress miraculously causes her to bouce off the ground and right into the air. This repeats for a while, with her also moving across land while bouncing up and down. Having captured a tornado previously in the segment, Bill steps up to the plate and prepares to try and lasso his lady love back to Earth. Unfortunately for Sue and Bill, he does not succeed.

At the last minute, Widowmaker deliberately steps on the end of the lasso, causing it to fall short of catching Sue. Bill doesn't get another chance at it either, as soon after the failed rescue attempt Sue bounces off the ground for a final time and is never seen again. All that's left is a sad cowboy and his not so noble stead.

The segment and film conclude with an epilogue of how after the incident, Bill would look up to the moon in the hopes of seeing his lady love...only to never see her. Despite their role in Sue's disappearance, Widowmaker remains Bill's stead, with no mention of whether the two went to couple's therapy in order to work through their issues and feelings for one another.

While my words have probably failed to properly describe it, the Pecos Bill segment is incredibly bizarre and off the wall to the point where it makes the movie. Without it, it would be a highly forgettable Fantasia successor. But the creativity and imagination behind the Pecos Bill segment, coupled with the ability to read all sorts of things into it that the filmmakers did not intend, are well worth the price of admission alone. Plus at 75 minutes, it's a breeze to watch through the whole movie.

If you have Disney+, you have no excuse not to watch Melody Time at least once. It's highly recommended and quite good, in spite of some of the segments being lousy.