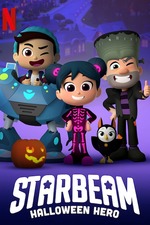 What’s it about: Skeleton Zoey and robot Henry had out to enjoy some trick or treating while Gramps stays home to pass out treats. The kids have a fun evening and head to the park for the costume contest. Captain Fishbeard sees the shiny Pumpkin Crown and decides to crash the party. Zoey transforms into Starbeam but Henry’s malfunctioning robot electronics prevent Boost from coming to assist and Fishbeard steals everyone’s candy after releasing the sticky sock cannons on the crowd. Starbeam and Boost track down his floating ship, use pirate costumes to sneak aboard, and return everyone’s sweets. Meanwhile seagull Kipper fights the home’s beam technology trying to get to his own sugar fix.
What I thought: I was unfamiliar with this youth targeted Canadian animation series. It focuses on a second grade superhero whose catchphrase “It’s time to shine” triggers her transformation. She lives with her regular human grandfather, works with her best friend Henry who uses his inventions to help her fight evil, and they have a bird sidekick. The character designs and backgrounds are simple, bright, and clearly computer generated. It’s cheery and short. There is a simple plot to follow, it cuts to the seagull’s antics to lighten the mood, and concludes with candy and bedtime curfew extensions. Seems fine for the target audience.