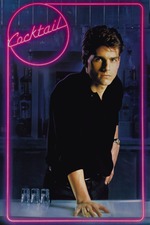 This is a movie that was ravaged by critics - it has a whole 7% on Rotten Tomatoes, and is a nominee of at least 4 Golden Raspberry awards - but made bonkers money at the box office and has undoubtedly had a major impact on popular culture. How do I know?

Because this movie has been heavily referenced on several television shows. The sitcoms "The King of Queens", "How I Met Your Mother", and "Happy Endings" all DID AN ENTIRE EPISODE EACH based on this movie. I mean -- THAT'S INSANE! The soundtrack featured iconic songs that were featured all throughout my childhood, most notably "Don't Worry be Happy" by Bobby McFerrin and especially "Kokomo" by The Beach Boys. "Kokomo" was also featured in (at least) Full House, Rules of Engagement, Brooklyn 99, and Fresh off the Boat.

This movie is about an incredibly good-looking, cocky, testosterone-filled twenty-something man played by Tom Cruise who has no choice but to become a bartender to pay his way through college and gets himself caught up in a lot of misadventures.

This movie is set in New York mostly, but also in Jamaica for a part in the middle. The World Trade Center features in the opening scene prominently. What's even cooler for me, though, is that a lot of the scenes were actually filmed in Toronto. Young Tom Cruise was running around MY alma mater!

If you think I understood a word of Bryan Brown's Australian accent, well, you'd be mistaken. And is this movie why so many baby girls were named Jordan at the time?!?!?!?!??!?!!?

Is this one of the most quintessentially '80s movies ever made? I enjoyed it a hell of a lot more than "The War of the Roses", another 1980s movie that I also saw today, but it unfortunately doesn’t touch perfect classics like "A Few Good Men" (1991, also starring Tom Cruise), or "Rain Man", also starring Tom Cruise and from this same year. So many things that people love about the movies were thrown into this one: New York City, partying, a trip to a fabulous place (Jamaica), Tom Cruise, white collar workplaces, blue collar workplaces, the art world, and a Cinderella aspect. It was just wild, and fun, and crazy. So much happened. LOL. I enjoyed myself.

Movies with scores under 30% on RT that I like

Movies referenced on "The King of Queens"

Doug: It was 1989, and I was working as a bouncer at this place called "Poison", one of the hottest clubs in Queens. But what I really wanted to be, was a bartender. The movie "Cocktail" was taking the world by storm and dishing out booze was the coolest job a guy could have. (Tells a long story about how his dream.) Do you understand now?