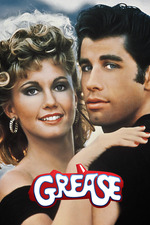 My mother is obsessed with the 1970s in the way that I am obsessed with the 1990s. It's a nice symmetry. I feel so lucky that my mother showed us "Grease" over and over again in our childhood. I don't know many movies before the 1980s. I don't know many of the famous classic musicals that everyone raves about and references. But I know "Grease"! And we love "Grease"!

The thing is, "Grease" is a movie and a musical - with great acting (Travolta? Holy shit. Stockard Channing? Come on). With great singing. (Olivia is a dream. John is great too). With great songs. With great choreography and dancing. "Grease" easily goes into my top favourite musicals / slash / soundtracks of all time along with movies like "Sister Act", "A Star is Born" (2018), "The Nutty Professor" (1996), "Rain Man" and "Dirty Dancing".

Every single element of "Grease" is amazing. The story is great. Every actor is good, every character is distinct, every song is catchy. I was singing and dancing the entire time I was watching. The humour is fantastic. There are so many funny parts that I rewound again and again. The movie is ACTUALLY romantic. The part where Sandy and Danny first see each other at school is so incredible. I cannot get enough of it. John is brilliant in it.

This movie is about so many things. Love. Romance. Fitting in. Being "cool". Betrayal. Jealousy. Expectations. Friendship. Sex. Being true to oneself versus trying to be worthy of who you love. Happiness. Has anybody ever been as happy as Sandy and Danny doing the Hand-Jive? EVER?

So many movies show the 1950s as this idyllic, innocent, overly sanitized time: "Pleasantville", "Back to the Future", "Peggy Sue Got Married". "Grease" shows the 1950s as dirty, grimy, funky, and so fucking cool. And this movie does something else that I appreciate. Instead of having Sandy be American as all of the other kids, the movie leans into the fact that Olivia Newton-John is Australian and makes Sandy Australian as well. I don't know why every movie doesn't just do this, instead of hiring non-Italians to play Italians, hiring Asians to play "Any Asian", hiring white people to play Asian, and on and on.

I have read accounts of people who "don't like" "Grease" or "don't get" "Grease" and it just breaks my heart! How can it only have a 3.2 rating? That's a "good" rating, but it's not a great one.

1. "Sandy changes too much for Danny." Has anyone who has made that complaint actually watched the movie? There is an enormous sequence in the movie where DANNY tries so hard to change who HE is to impress Sandy! The entire movie is about Danny trying to become a better version of who he is - trying so damn hard to evolve to be a person that is worthy of who he loves. Everyone glosses over what DANNY is wearing in that scene! Also, yes, the Pygmalion trope is a common one. Why is it so adorable if Audrey Hepburn and Rachael Leigh Cook change to impress a man, but god forbid Olivia Newton-John do it?

2. "The people portraying high schoolers in the movie look 30". If you've been following me here on Letterboxd, you might know that I hate child acting. The actors themselves are blameless. I blame the parents who would let their child act before the age of 18. Everyone is against child labour and child work, but when it comes to the entertainment industry suddenly people have no morals. Well I think that it's wrong. What kind of pervert is like "I need my teenagers to look like teenagers". Ew! Who cares if the cast is full of adults? It makes for way better acting and singing anyway! Shut up!

"Grease" is one of the best movies of all time. I was shaking with goosebumps and crying throughout the entire televised school dance scene. It could not possibly get better than that in a Hollywood movie. I doubt that I have seen anything better. I'm so glad that "Grease" made $366 million on a $6 budget. Yeah! "Grease" is the word!