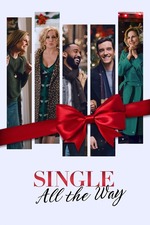 Wow, guys, I REALLY, REALLY liked this movie. And it's a Netflix movie!

This movie is funny, well-acted, and ROMANTIC. Oh my god, I am kind of swooning! It's also a good movie about family and friendship.

What a great cast! Philemon Chambers - who doesn't even have another credit on this site - is sooooo hot and he was so good in this movie! I assumed that he was a really experienced actor!

Uh, yeah, I'm kinda blown away! This is the best Gay Christmas movie out of the four that I've seen in the past two years. (I know, lol, it's not that many!)

I'm DEFINITELY watching this one again. All of Philemon's little nuances kind of broke me. What's with all the bad reviews?! I was smiling through the whole thing!

Oh and I forgot to mention the SOUNDTRACK! It's so good that I'm not even going to spoil who's on it! They PUSHED the budget on this one, baby!