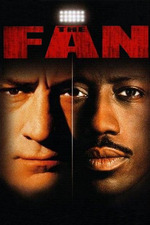 This movie is really sick. It's like Misery but with baseball and The Rolling Stones. The funny thing is, I only saw "Misery" for the first time last year so I could never make that joke before. But, I've seen "The Fan" several times since 1996. There's something sickly watchable about it for me.

This movie assembled one of my dream casts. Robert De Niro, Wesley Snipes, John Leguizamo, and Ellen Barkin are the stars. How could it get better? And then the bit parts are cast with Benicio Del Toro and Jack Black. (Jack is only blink and you'll miss him.)

The acting is great. And you can tell that Tony Scott knows about baseball with this movie (although - maybe not always how to shoot it? LOL). There is a lot of tension and anxiety in watching this movie that is well built up by the direction and the soundtrack. (Although, sometimes the music is WAY TOO LOUD over the dialogue. Tony Scott trademark.)

I have to sing this movie's praises for a few more things. The movie is so multiracial and it's a 1996 release. Tony treats race very respectfully, unlike his brother. And most of all, Ellen Barkin's role. She plays a baseball broadcaster. In 2021 women who work in sports still receive TONS of abuse for even existing, and Tony Scott plunked one down right in the middle of the fucking movie. That's so cool.

I thought I had seen some bad fathers in pop culture but I forgot. Robert De Niro in this movie is definitely one of the all time worst!

If you like movies like this, maybe this would also make a good double bill with One Hour Photo.

Oh boy is this movie dramatic. LOL. I always think that it's funny thatso many associate De Niro with his work in the '70's but I grew up with De Niro in movies like this and "Awakenings" and "Meet the Parents".