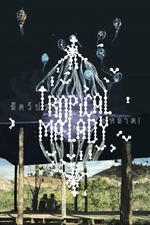 'Remember my uncle who can recall his past lives?'

For me, the turning point in Tropical Malady, another of Apichatpong Weerasthakul's spacious, mystical films set in or around the jungles of Thailand, is when one of the film's two lovers (a soldier and a country boy) takes a piss. Immediately afterward, the other man grabs his love's musky, unclean hand and rubs his nose against it, taking a very long whiff. The gesture is shocking, even damning, in its intimacy, primal to the point of being unhuman. That is what marks it as a transition. From here on, there is only impulse and urge.

It's a testament to Weerasthakul's eye for locating the latent strangeness in the everyday that when, soon after this, one of the men disappears and becomes an animal ghost, stalking local cattle at night and shifting this altogether straightforward tale of tentative male romance into a vibrant, ghostly chase through the jungle in which love and the afterlife feel like conflicts of animal lust, this headlong dive into mysticism does not throw us off or surprise us. The film is based on the stories of Noi Inthanon, whose work I don't know, but the learning curve isn't steep; the film's world, full of food and family, chance, death, labor and stories of what might linger beyond the here and now, had already eased us into a habit of finding room in this unusually fecund world to accommodate the otherworldly. Stories and belief play a part in this. Here, as elsewhere, Weerasthakul incorporates imagistic detours through local lore that eventually convince us, when shit gets weird, to simply go with it.

But more than even this, it's Weerasthakul's images that convince us: suffocating jungle landscapes in which, one imagines, anything can happen (or at least may as well, in a world as ripe for mysticism as the one he depicts); uncommonly stark moonlight beneath which everything is apparently denuded and lain bare; a whisper of a tiger's tail appearing from below a woman's skirt. Even mundane labor -- cutting ice blocks; military duties -- is subtly aestheticized, given a sense of place that makes the environment of these actions fascinate us, elevating the actions themselves.

The ghosts of Weerasthakul's films are lonely, but the world of his films is not. Seeing his living characters carry out their lives, it is no wonder, really, that the ghosts should choose to keep living among them.