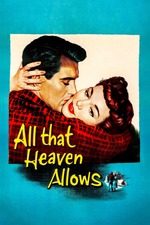 After Imitation of Life, I was like “Hell yeah melodramas are dope! I need to watch more Sirk!” After Magnificent Obsession, I changed it to, melodramas are dope, but maybe I just liked that one Sirk movie.” Now I can confirm... Sirk is dope.

While less over the top and ridiculous than the other two of his films I’ve seen, All That Heaven Allows just nails the emotional aspects and the tragic, forbidden love that makes these stories so interesting. It’s a somewhat quiet film, one that wears its message on its sleeve without being heavy-handed in the way Magnificent Obsession is. The best part? It’s message works with more than just romance.

Being true to oneself, and not just caving to fit social norms, is a common refrain in films. Typically, our heroes are loners or near loners. Partially, this is due to us needing to meet the characters as we go along, so having the main character having to be introduced to others allows for easier explanation as to that. However, there’s still something about an individual being able to have true self discovery that is narratively gripping, and being alone helps with that.

In this film, though, we have the opposite happening. Our main character already has a “full” life, one with children, friends, a marriage (even if it’s over). This isn’t typical at all. An older woman as our protagonist? It doesn’t happen. Even crazier? The love interest being younger than her.

All these elements seem to go against the standard construction of a film, and it would be easy to question why go against something that works. For me, though, I think the self-discovery is more effective here than most films, and it’s exactly these changes that make it so.

Let’s begin with why she’s older. When you examine your life, you try to create a sort of chain reaction of your choices. You think about how your schooling and past jobs led to where you are now, how past relationships and friendships led to your current social group, and you feel like if there IS something you want to do, it is only worth it if you build on pst experiences. Otherwise, didn’t you just waste time? You might think yes, but really, shouldn’t you always be doing what you’re comfortable with?

All the other characters try to appeal to our protagonist in a negative fashion, and she almost buys into it. She is being reminded of her age, her current lifestyle, and it’s just sucking away at her. What’s funny, though, is that all that’s really happening is that everyone around her is acting childish, gossiping and thinking selfishly despite being fully grown. The one person who thinks differently? Her younger love interest. In many ways, he’s wise beyond his years (albeit too stubborn), and the relationship between the two actually ages both of them up, instead of down. The film is giving us a lesson many don’t learn until it’s too late.

But, really it’s never too late, and that’s where the fact that this story is told through a relationship plays in. It always seems like your one opportunity at romance comes into play while your young, and if you date later in life, it’s only for companionship, and the energy is gone. Here, that energy still exists, and it’s acknowledged that even as you age, the same desires still exist, and your opportunities aren’t over. By showing passion between the two, we are caught up in the whirlwind of emotions and reminded “it’s never too late to get what you want, you just have to be true to yourself.” By having the audience engaged by the romance, the message is allowed to sink in deeper, and as all the pieces of the puzzles come together, you realize that the message is applicable even if you think you’re too far gone.

Of course, melodramas are usually just going to be written off as overwrought and dramatic to a fault, which can still be true here, especially near the ending. I feel as if that’s unfair, though, as even as it’s pulling on the audience’s heartstrings, it’s still saying something, and it’s manipulating the audience in order to sneak in that lesson from the side.

So, I plead to you, reader... watch some melodramas, no matter how “above” them you feel you are.