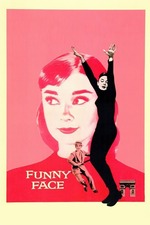 Okay, but when she first gets her makeover, Audrey Hepburn looks like the Childlike Empress from The Neverending Story, sorry not sorry.

This movie is really fun, and yet another entry in the “quarantine films that make me feel happy and stuff” canon. It’s a gorgeous movie, one that uses color and location to look just as flamboyant as those old Hollywood musicals with elaborate sets despite technically being way more practical and realistic. Every second is joyful in some manner, even when it stumbles.

Musically, I think it works for the most part, but lyrics wise, it sometimes slipped into a cheese that kind of felt stilted in comparison to how well crafted everything else is. Combine this with Hepburn’s vocals (which, don’t get me wrong, she’s the best part performance wise), it just doesn’t always work. Hepburn isn’t bad per se, but something feels off when surrounded by other performers who are nailing every second of their songs.

The other prevailing issue probably stood out more due to wishful thinking on my part, but I did get somewhat annoyed how Audrey Hepburn’s life was constantly proven to be mostly, um, wrong. She didn’t want to model, but finds all her joy there, and her philosophical mindset gets proven to be mostly deluded and over-complicates ideas that the other characters seem to understand. Part of this may be due to the age differences between her and the other main characters (which also felt off, as her love interest being 30 years older than her barely got acknowledged), but the other characters don’t really have to learn much. This is all the more disappointing when the fashion industry workers all seemed to be yes-men and personality-less, which could have been an interesting critique, but it’s thrown away really quickly.

It’s an infectious movie, though, and I had a blast. Also, I uh... may have not seen an Audrey Hepburn movie before this. Sorry to bury the lede.