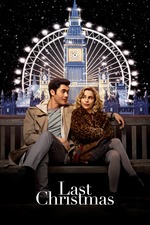 I liked this movie. And I really don't like Christmas movies. (I avoid most Christmas stuff.) I watched it because Emilia Clarke + Emma Thompson + Paul Feig. Watching things for their components doesn't always work out, but in this case, I was rewarded on all counts. I didn't know any of the press lead-up to the film, so I didn't know there was going to be a twist, nor did I anticipate one. But I was waiting for *something*—because when Henry Golding (who's also great, especially when he starts to let some of the drama begin to measuredly sneak out) showed up, I thought "Oh… okay… gender-reversing the Manic Pixie Dreamgirl… interesting maybe…? But… no, it STILL doesn't work… but I have a lot of faith in Feig and Thompson so hopefully there's going to be a justification…?" So when that justification (twist) came about, I felt the feels, the catharsis, and also… relief that "PHEW YES it works", and satisfaction that "YES this movie WAS about all the other things I was rooting for it to be about, not just pixie-fix-it-romance."
Two other shout-outs:
• Michelle Effin Yeoh. YES. And the deft way she and Feig both embody and spoof more romantic tropes.
• I'm a professional singer on stage, and a lot of movie-star-singing tends to annoy me. Not this time: I completely loved Emilia's and Emma's singing.

Finding happiness by helping others… on the one hand, YES, I also like how this is framed as a hopeful strength of the human condition. Also yes, I could anticipate some problematicness with the salvation-through-being-a-savior element. Two things I appreciated and thought were well done with it:
(1) She's not Santa, she's an Elf ;-) I don't know if this is intentionally part of it, but it's certainly in the writing and performance: it's all framed more as her assisting/contributing and joining than trying to take over or lead.
(2) oh the audition sequence… the talents on display, not only delightful and impressive but a subtle jolt of awareness of how many different people and many different roads may lead to homelessness, and people will have facets and talents one wouldn't anticipate, if allowed to keep sharing them. (Am I overthinking? Always.)

Not a genius movie but a solidly lovely one. Ultimately, carried by the grounded funny charm of Emilia. I love that she broke through as Dany but we're getting to see more and more of this side of her. (Huh… relevance to Emma Thompson's career too…!) I'm on board.

My sole complaint: WHAT WAS A PEREGRINE FALCON DOING UNDER A ROOF IN THE MIDDLE OF LONDON? I WANT *THAT* STORY!!

Update: Ah… google tells me that they're extremely common in London, the second-highest urban-dwelling population in the world. So, thank you, film, you taught me something. ;-)