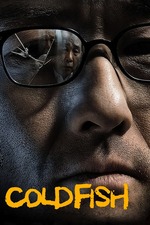 I added a bunch of movies to my watchlist a while back but I'm just now getting around to watching some of them. This is actually my second movie from the set of movies I was able to find. I had not really heard about this movie until I discovered it on a list. I don't think it appears on best horror movie lists because maybe people don't see it as a horror movie really. It has some elements of a horror movie but it fell into being a thriller more. I'm fine with thrillers, as I see them as a close cousin to a horror movie.

Whatever genre you want to put this movie in, it is a very good movie regardless. It mostly has to do with how quickly someone's life can change. I had no idea that selling fish was such a cut-throat type of business. I know that isn't really the case, as the fish were more of a way to scam people than anything else. Even so, it leads the main character down a dark path and it was interesting to see how this ends up changing him as the story moves forward. I didn't completely care for the ending, but I enjoyed the ride it takes to get there. It was a very long movie though. It has some slow spots because of the length but the story makes up for that.