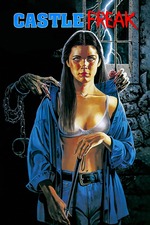 Here, we have yet another film that I would give a hard pass to even with the talent involved in the form of Jeffrey Combs and Barabara Crampton on screen and Stuart Gordon adapting another H.P. Lovecraft story behind the scenes. I remember this being a huge rental for months during its DTV release but I was judging a book by its cover with the video artwork and pretty lame even for a DTV title. But once again Joe Bob brings it to my attention and I'll give it a go since he is hosting. In this case, as it is more often than not, I am glad he offered this one up and it's always a nice treat when he gets someone involved with the production of the film being viewed involved. In this case he has the barely aged a day Barbara Crampton co-host a few segments and even goes out of his way later in the program to call Felissa Rose of Sleepaway Camp fame to chime in on a particular anatomy (or lack thereof) question involving the film's Freak.

Castle Freak is a grotesque, gory and creepy as hell Gothic tale with surprisingly and necessary for the story low key performances by its lead stars. Jeffrey Combs underplays the broken father/husband brilliantly off of Barbara Crampton's post tragedy loss of love for her husband wife/mother.

Director Stuart Gordon plays its concept straight. There is zero levity in this tale of a grieving family who inherit a 13th century castle with a kept secret lurking about looking for a companion. And what Gordon does here with the magnificent looking monster is genius. We've all seen the misunderstood grotesque freak looking for love in all the wrong places sympathetic tale done dozens of times. And while there are remnants of that, Gordon adds in a nice blend of off the rails horror. The Freak simply mirrors what he sees as affection, all with horrible and disgusting results for those that are unfortunate enough to catch his eye. But while a Frankenstein's Monster might feel remorse for his accidental murderous deeds, our Freak seems more angry at the fact that his playmates don't want to play anymore after their often gruesome death. It makes for some very chilling moments as the Freak zeroes in on the blind and vulnerable daughter.

Castle Freak is a bleak affair and is not a fun film to watch in the slightest. Personally I think I'm going to go cleanse my pallette with some Seinfeld episodes or something. But for any horror fan who loves a good creepy and gory story I would highly recommend it.

"The Drive-In Will Never Die.