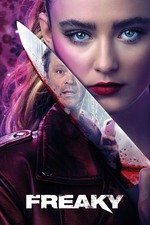 The thing is.. the Vince part was fun.. but the murdering bitch part was not. Like what was the motivation? Blind rage? I mean.. revenge? Couldn't be. It just bothers me when the villain is literally just there to kill and there's like no backstory or anything.

That being said. There are some fun moments in this. It's mostly Vince who does the heavy lifting but Misha Osherovich as Josh was also good. Yes, very cliché and stereotypical gay character but still fun, and just refreshing among all the other dull characters.

Freaky is filled with dull characters. The short ending after the ending was also useless. I would have liked it to have been a more straight forward ending.

The damn poem was so cringe, I could not even watch it.

Overall.. didn't really work but was alright. Freaky Friday is better. Babysitter is better. It is what it is.