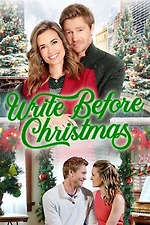 What a nice little movie. Honestly, I was pleasantly surprised and not at all, I don't know... cringing through this. Chad Michael Murray is the lead here and he is just good enough to pull off the script. Like usually these movies have a cringey line or joke here and there, but they need charm to pull those off. Chad has the right amount of charm to make cringe more like cute, you know!? And match him with Torrey DeVitto's on screen charm and Write Before Christmas is actually cute! 🙈

Anyway, the plot of this is that a woman sends off 5 Christmas cards. She was supposed to send one for her boyfriend but they break up so she sends out five: aunt, brother, BFF, pop star and her cello teacher.

The final one ends up in our Chad character hands and well, things go from there. While the main romance does revolve around Chad and Torrey (I've decided not to remember character names 😜) there are other plots happening at the same time. So we get to see four side stories, the BFF doesn't really get an actual side story which now feels unbalanced but she was also the only non-single one.

And by dividing a movie into multiple stories, I felt like the stories were more fleshed out. Like you had enough time on each story to like it but you didn't spend too much time on them, which would have been too much. The aunt one was a bit cringe but the brother one was the worst of the bunch. The pop star one had a different love-angle here, it was more about himself, his brother and his former band mates.

This brings us to the end.. where I'm not hating on this because it was good. There's a very charming scene involving a tree and it was so adorable that I decided then that I wasn't going to hate it. Like I laughed, I was pleasantly surprised by that. 4 seems like a lot compared to other movies but like... for a Hallmark Christmas movie, this was a 4! 😆

Or maybe it's day 5 and I'm slowly becoming numb to the cheese....