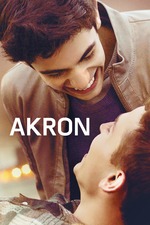 It's hard to be too critical about such a guileless and sincere effort, especially since its assumption of the normality of gay male love without any social conflict whatsoever feels so refreshing. But it's not that hard, and it does have some strengths. I wouldn't call its direction of actors subtle, but the handling of the two attractive young leads, basically encouraging them to be themselves, I would think, has its virtues, making it easy to like them. The same goes for the young men's parents.

None of them can do much to help the frequently awkward script, however, with a narrative line that is painfully and ineptly telegraphed and dramatized. For a film which deals with the lasting impacts of a death in the family, it really didn't feel like there was much at stake. There's nothing to note about Akron's style, either, which is something I couldn't say about Last Summer, another non-coastal tale of young gay male love. But at least in Akron, they get it on.

The Girl with All the Gifts