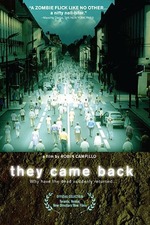 This fantastic paracinematic art film follows out its basic premise — what if the dead came back? — to its logical and enigmatic conclusions. It's a metacritque of the brutality and nihilism of the zombie-apocalypse subgenre in that the returning deceased are treated first as a logistical and scientific problem, later as an existential one for the living and finally as an issue of self-determination for the dead themselves. Tenderly and subtly realized without overt symbolism or metaphor and with an admirable materialism, there are therefore moments of real emotion — dread, guilt, devotion, rejection, remorse — that we really don't get in the more bloody and misanthropic examples of the genre. I'm really not surprised that this has been overlooked in the States among horror fans, unlike a good many other stupid and simple-minded French slashers, since dealing with death in a straightforward and adult way is not something Americans do well or even admire. So by all means, watch it with an open mind.

It was re-imagined as an equally worthy and even more mysterious French television show called Les Revenants.

We Are What We Are