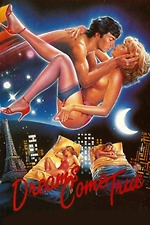 Not exactly the thrilling sex comedy the poster art implied, but not a waste, either. Dreams Come True was filmed in Wisconsin on a tiny budget with a cast of non-actors. In this low-key drama, a young man discovers he can travel to other places in his dreams. This ability helps enliven his otherwise humdrum life, where he works at a machine factory and cares for his dying, bed-ridden mother. Eventually, he meets an attractive nurse who joins him on these dream-trips - which become more complex and dangerous the further they go along. Although the directing and acting is as inept as one would expect, I thought the concept was different enough to warrant sticking with it. The unknown lead actors are appealing, the special effects silly yet enjoyable. It only falls apart in the final third.

Meta note - director Max Kalmanowicz's only other credited feature, The Children, serves as the film-within-a-film that the lead characters go and see on a date.