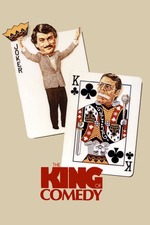 Wrote this for class so I thought I’d immortalize it here. Just a little on The King of Comedy. (Informal writing assignment -> excessive use of personal pronouns! WOO!!)

Scorsese’s movies have a bit of a stigma towards them. No, not such a “negative stigma” as you might associate with the word ‘stigma’ (which is a stigma itself!), but rather a conception that his films are one-and-the-same. I know that when I reflect Scorsese, I’ll sometimes think of his films as: Gritty; too packed for their own good; quite long; crime/mob related; intricate— the list goes on. For these reasons, I haven’t done the deep excavation of his filmography that I probably should complete. When it came time for me to watch The King of Comedy months ago (I first watched it in July of 2019), my apprehension grew mightily. I just, unfortunately, was not interested. That’s very crass and childish of me to say, but it’s true.

So, naturally, it came as a complete surprise when I found myself completely entranced within this devious, deceptive world that revolves around one man and an obsession. Scorsese never goes too deeply into what exactly is wrong with the clearly broken Rupert Pupkin (whose name, meanwhile, is permanently engraved within my head. It’s a perfect name for this character!), thankfully; to learn about Rupert would be to reveal Batman’s mask. Depth in a character is (obviously) crucial to development of narrative/setting, but allowing Rupert to exist as a fly, always buzzing and always just there, with little background information, genuinely works to the script’s benefit. We hear brief glimpses of Rupert’s homelife: in a masterfully edited scene early on, we see a daydream of Rupert taking idol Jerry Langford to dinner intercut with Rupert back in his basement, his mother beckoning him to come upstairs. Not only does this reveal layer after layer about Rupert (how about, um, he’s a little crazed??), but it shows his homelife without ever directly stating “this is Rupert, and this is his home”. Rupert’s mother, entirely off-screen, exists as a painful reminder that Rupert is, essentially, nothing. He lives with his mother chasing a dream that will never come true, no matter how hard he closes his eyes and wishes.

A dream that could never come true, unless some drastic measures were enacted. As Rupert and fellow obsessive Masha conceive a plan to kidnap Jerry, so to get himself on to the stage and make his dream come true, I began to wonder whether or not The King of Comedy was getting in over its own head. Is this film trying to conquer too much for its own good? I thought long and hard about this, and mulled over watching the film again for a bit. Rewatching it recently, I realized that, no, the film is doing everything that it needs to be doing, yet to an unparalleled degree.

The King of Comedy is a deeply funny character study that does a better job representing the period in which it was made (Reagen-era 80s) than any other film of which I can think. But what changed? What flipped the switch in my brain that this film is doing everything it needs to do? Well, since my first watch to now, I’ve just seen a lot more of Scorsese’s movies. I’ve learned that Scorsese fills his films to the very top with effective genre-bending content, well-framed narrative technique, and impeccably timed set-pieces and scenes meant to evoke goosebumps, all while serving as impalpable relics of a time that once was. The King of Comedy does so much with so little. Lots to pick apart, lots to discuss; and I didn’t even get into the fact that Robert De Niro’s performance as Rupert is the very best of his long, iconic career. Another day, another day.