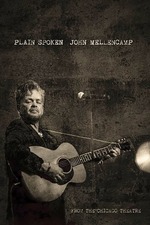 This here is a rather interesting film as it takes two different formats and basically combines them. On one hand this is a concert film with John Mellencamp performing with his current band in Chicago. It's also like an audio commentary as Mellencamp talks over the concert footage as he discusses his life and career.

If you read some reviews it seems a lot of people don't like the concept here. It seems most people would rather have a flat out concert or just a documentary with Mellencamp discussing his career. I personally thought PLAIN SPOKEN was well executed and in the end I think most Mellencamp fans will enjoy it.

I actually really did like the way this was made with the music basically in the background and Mellencamp's narration up front. Mellencamp talks about all sorts of subjects from him as a young man, the time he punched his father, his first trip to New York City, trying to get a record deal, what it takes to make a hit record, trying to continue hit records and he then gets to the point in life where he's at now.

I thought there were some good stories throughout the documentary including the stuff dealing with Mellencamp and his father. The singer-songwriter also gives his opinion on where rock music is today and he questions where the next great songwriter is going to come from since there are so many platforms and voices out there.

As far as the music goes, it does sound terrific but then again, be aware that it's basically in the background and it's the spoken words of Mellencamp that are out front so this isn't your typical concert film.

Power of Grayskull: The Definitive History of He-Man…