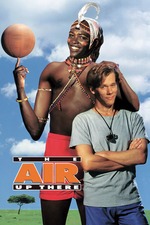 The Air Up There

Jimmy Dolan (Kevin Bacon) is a basketball coach who comes under pressure and needs to find a recruit that is going to help his team and his own career. He heads to South Africa where he finds a giant of a man and the coach must convince him to play basketball.

THE AIR UP THERE is the type of film that wants to offer up some cheap laughs in a rather cheap story. If you're a fan of Kevin Bacon then you might want to check this film out since he is good in the role of the coach but sadly the overall impact of the film is quite minor as there's nothing awful here but at the same time there's nothing too good or memorable either.

I think the biggest problem with the film is its screenplay, which is pretty standard stuff as we get the coach in trouble, he gets his top recruit and then we have the various dramatic messages that have to come out about building character. The film also falls well short in its attempt at humor and by the time the film is over it just runs on way too long for its own good.

My Father the Hero