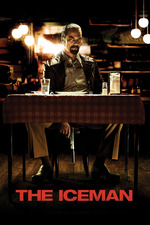 The statistics of this true story about a hitman who killed hundreds of people in his lifetime are more compelling than this drably presented diet-Scorsese movie spin on them, but Michael Shannon absorbs your attention right away with his muted, hulking ferocity and powers the entire movie like a one-man electrical current. I attribute most of my enjoyment of this to him. Adding various novelty fun is a grab bag of a supporting cast, from some predictable yet aptly chosen names (Ray Liotta in a gangster movie? You don't say. James Franco and Stephen Dorff in a movie about low-life criminals? Unbelievable! And hey where ya been, Robert Davi?) to a bunch of welcome yet unlikely faces (Winona Ryder, Chris Evans, David Schwimmer). Since the subject matter is relentlessly grim and hopeless, it's hardly a sin that the movie uses such a murky color palette and somber tone, but the cut-and-dry approach to chronicling each major event in this guy's life leaves something to be desired, and the oppressive atmosphere kinda swallows itself up overall. The best parts are when it finds ways to convey Shannon's psychological state through his behavior, as during an episode of road rage that endangers his family and reveals his capacity for (perpetual state of?) volcanic aggression.