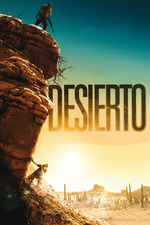 Desierto revolves around a group of Mexicans migrants (with Gael García Bernal as a leader of sorts) crossing the U.S. border, while a vicious vigilante (played with evil relish by Jeffrey Dean Morgan) hunts them down one-by-one in the desert.

Much like Sam Fuller, Ida Lupino and Steven Spielberg, Cuarón realized that genre films not only makes political and social commentary more palatable to a wider audience, it also makes them accessible. A chance re-watch of Spielberg’s Duel — a bare bones movie about a tanker truck terrorizing a helpless commuter for no apparent reason — unlocked something in Cuarón’s mind.

“It’s such a simple narrative, just a truck chasing a car,” Cuarón says. “By being so simple it becomes so universal. When I watched [Duel] in high school and I was being bullied, the truck represented my bullies. Later in life, [Duel] represented something else. You can project your own fears.”

Full interview with Jonás Cuarón about Desierto at Boulder Weekly

A Short Film About Killing