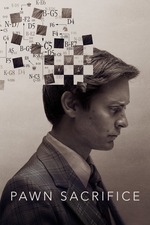 Utilizing all the trappings of a tortured genius bio-pic: Mommy issues, paranoia, inability to communicate and behave with the public at large, Pawn Sacrifice follows Bobby Fischer (Tobey Maguire) on his late 1960s early 1970s quest to be the best chess player on the planet. It is a quest that has fits and starts, but never once shakes the feeling that Fischer is the greatest chess player on the planet, possible ever, and once given a fair chance, he will dominate in a way no one has ever seen.

But Fischer’s quest made him the pawn in a much larger game, primarily a political one as Fischer’s greatest opponent was a Russian, Spassky (Live Schriber), during the height of the Cold War.

Fischer was also a pawn in Father Lombardy’s (Peter Sarsgaard) game — a priest who never prays, carries a rosary or invokes the word of God or the teachings of Jesus — who forgoes getting Fischer any meaningful medical attention for fear that it will damage his beautiful mind.

It all adds up to zilch. Fischer is reduced to a conspiracy nut, the supporting cast exists solely to shepherd Fischer to the inevitable chess match, the flames of Us vs. Them-Capitalism vs. Communism are flamed for no apparent reason and director Edward Zwick's style offers little insight into Fischer’s troubled mind beyond a few quick cuts and a constant low hum.