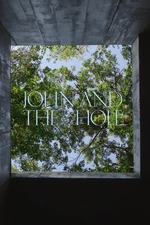 What an odd movie. I’m still trying to figure out if that’s a good thing or not.

Let me just say, that right out the gate, I was really drawn in. The atmosphere and the downright ambiguity of the story was so engaging. I loved the fact that every single moment of exposition was told visually, with little dialogue. We are shown these characters and the story through interactions and visual moments, instead of just expository dialogue. And I think that’s brilliant.

I also really like the entire idea of a “story within a story”, and the fact that we as the audience for the longest time don’t really know the genesis of which came first. Hell, we don’t even know where we fit into the equation. Again, it’s that sense of ambiguity that kept me so engaged. However, I will say, the "other story" with red headed girl could be completely cut out of the movie and you wouldn't even notice. Even though I enjoyed the idea of what it was trying to do, it just didn't land at all.

I will say that during the last half hour this really starts to fall apart. It becomes so clear what the movie is about and the messages of growing up and identity. I think they could have gone a little deeper, but I still have to give this movie credit for choosing the tell the story in the way that it did. It just seemed like it wanted to say more but didn’t know how.

I’m really excited to see more of what this director does, he clearly has a knack for visual storytelling, which I love! All in all, a pretty average film with a REALLY strong first act but a devastatingly awful final act.