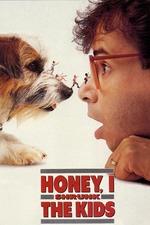 Honey, I Shrunk the Kids

Wayne Szalinski (Rick Moranis) wastes his time making useless inventions, but one finally works when the neighbour kids accidentally hit a baseball into his shrinking ray and shrink themselves in the process. Now his kids and those neighbour kids have to make it safely from the backyard to the house while Wayne and his wife search for them. Honey, I Shrunk the Kids opens with some nice old school animated opening credits and is surprisingly written by Stuart Gordon and Brian Yuzna who are generally remembered for their horror output.

Whether the kids are scaling blades of grass, riding bees, getting bombed by drops of water, eating giant cookies, wrestling giant ants or dodging lawnmowers the special effects are well done and continue to hold up to this day with certain elements like the stop motion being a bit dated. Unfortunately, the script itself is a bit mediocre and the cast is merely serviceable with the exception of Matt Frewer, who has always had a talent for playing irritating pricks, as the father next door. Honey, I Shrunk the Kids isn't exactly a classic, but for those who love movies with characters shrinking or are looking for a decent film for the whole family it certainly fits the bill.

Batman: Mystery of the Batwoman