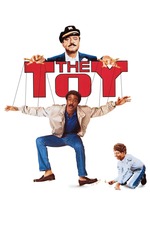 Richard Pryor is a legend. He's one of my favorite comics of the late 70's through the late 80's. His performance is easily the highlight of the film, and while I gave it a slightly negative score, it's a very enjoyable film. Most of the comedic moments fail, some because they seem kind of dated, which lots of parts of the film do, some of the humor works because of Pryor's nonstop charisma that carries the movie. Jackie Gleason is solid as the rich business man who doesn't ever spend time with his son. His son in the film, played by Scott Schwartz, in about the first hour of the film, you're supposed to feel bad for because his dad doesn't want to spend time with him, but he's just an annoying spoiled brat, and I think that's due to the writing, not the performance. He's a sore loser, he dumps random liquids all over Richard Pryor, and it's supposed to be funny, but it wasn't, because he isn't a sympathetic character. While I enjoyed watching the film, and the final act is actually pretty good, the film can't get to that fresh percentage because of some dull humor, scenes/situations that have become very dated, and a main character who the audience has no sympathy for. It's worth a watch for Pryor's awesome performance, but I don't think I'll ever watch it again.