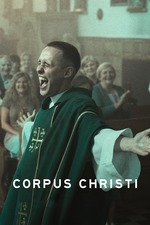 I came away from Jan Komasa’s film feeling like there was an underdone very interesting drama nestled inside a piece of tabloid TV covering, so I was not surprised to discover that it was conceived as two seperate pieces of writing.

The outer layer is a story about how Daniel (Bartosz Bielenia) is released from a juvenile prison where he has been serving a sentence for a driving-related manslaughter conviction with the support of the prison’s priest, Father Tomasz (Lukasz Simlat), who arranges a job for him in a sawmill in a rural village.  On his way to the sawmill, he stops off at the village church where a lie to Marta Sosińska (Eliza Rycembel), a young woman he encounters there, sees him mistaken for a priest.  The old priest, Father Wojciech (Zdzislaw Wardejn), needs to book into a detox unit, so Daniel finds himself as the temporary parish priest, confronting an emotional cancer that is eating away at the community.

The core of the film is this cancer - a year earlier, six teenagers from the village were killed in a head on accident with another car in which the adult driver was also killed.  The village has built a shrine to the dead kids and regularly prays there.  The village blames the other driver for the accident and continues to vilify and exclude his wife (Barbara Kurzaj), whose grief is exacerbated by Father Wojciech’s refusal to bury her husband’s ashes in consecrated ground.  As Daniel wades into this dispute, the film explores issues like collective trauma, complex grief, forgiveness, reconciliation and redemption.

This part of the film can get a bit preachy - in one of his sermons, Daniel says: “To forgive doesn’t mean to forget.  ‘Forgive’ means ‘love’. To love someone despite their guilt.  No matter what the guilt is.” and in a later exchange with the mayor (Leszek Lichota) who tries to pressure him to let sleeping dogs lie, Daniel says : “You have the power, but I have the right.” To which the mayor sneeringly replies: “You have the right, but I have the power.”

When screenwriters Mateusz Pacewicz and Krzysztof Rak presented their draft screenplay to Komasa, it was only about a young replacement priest coming to the village and finding himself with a congregation mired in their grief and hatred for the widow.  Komasa decided that Daniel needed a troubled backstory and the fake-priest storyline was added.

This does allow for a parallel redemptive arc for Daniel but creates a new set of problems that the film does not manage to overcome.  Apparently, pretend priests are not uncommon in Catholic-majority Poland but the notion that Daniel could take over the running of the parish on the basis of a couple of lies and a truckload of chutzpah requires a massive suspension of disbelief.  That he turns out to be sentenced for dangerous driving causing death is not impossible, but in the context of the plot is too convenient.

It is also not clear why Daniel was released.  If he was on parole, surely his failure to turn up at the sawmill would have come to official attention.  If his sentence was served, that would be a very light sentence for manslaughter.  If he was released becsuse he had turned 20, which was the age limit for juvenile detention, how did the whistleblower, who had been released to the sawmill, end up back in juvie with him after Father Tomasz is alerted to his impersonation and arrives to remove him.

Bielenia is mesmerising as Daniel and has a charisma that lets you believe that he could hoodwink and win over a congregation that was conditioned to defer to their priest (they had ignored Father Wojciech’s drinking after all).  But that strong central performance and some excellent cinematography from Piotr Sobocinski that delineates the washed out gloom of the juvenile prison from the lush greenery and natural beauty of the rural setting are not enough to paper over the narrative cracks for me.

He film won a stack of festival awards (55 wins and 41 nominations) including an International Feature Film Oscar nomination in the year where Parasite swept all before it. The Madman DVD has no extras.