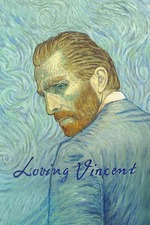 The best thing about this film is its animation. It's all meticulously crafted oil paintings done in the style of Vincent Van Gogh, and it is the thing I appreciated most about this film. You can tell that a lot of hard work was put into creating these paintings, and I feel that it paid off in the end.

The voice cast also does a great job with their roles, and tries really hard to give some personality to these otherwise disposable characters.

The biggest letdown of this film is its story, which lacks depth and is ultimately uninteresting. It makes the 90 minute film feel twice it's length, and outside of a few interesting plot points and character interactions, it's entirely forgettable. It's just a shame that a film this meticulously crafted has such a weak and forgettable story. Again, I felt that there were a few parts I enjoyed, but the majority of it just left me feeling indifferent.

There's no denying that Loving Vincent is beautifully animated. There was obviously a considerable amount of hard work put in, and if I was judging this based off the animation alone it would be a 5/5. However, the film suffers from a weak and semi-interesting story, which brings the film down as a whole. If you want to experience the incredible animation then watch the film, but just know that the story leaves a lot to be desired.