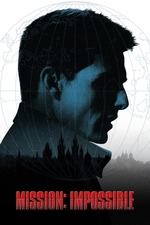 My god, those opening thirty minutes... Foundational. This was such a mysterious movie to me as a kid, something I saw quite early and didn't know how to digest. The scenes in the foggy alley, the bloody nightmare Jon Voight, the way death just appeared without sense or warning. It was scorched in my head. It was upsetting and intoxicating. Had I ever encountered this sort of death and failure in a film before this? I really doubt it. Has another action blockbuster ever hit such paranoiac sorrow as that opening sequence? I really doubt it. Even now the scope of the early failure feels wildly grounded, against the rules of action film.

Then Langley is justly iconic, and while the ending isn't totally satisfying, the train sequence in no way overstays its welcome. Three parts, almost three different films, each worthwhile. De Palma is bringing the heat and I don't think Cruise ever approaches this level of action star screen-power again. An essential movie.