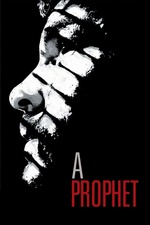 Upon his arrival at prison to serve six years, 19 year old Malik El Djebena is at his vulnerable moments. With no one on the outside or inside, can't read or write. He falls under the sway of Corsican mobsters, led by César Luciani. There is this reluctance in his eyes when making the decision, but he is within these confided walls of prison with no escape from anything.

Directed by Jacques Audiard, Un prophète is a brilliant portrait of a character who slowly makes his way inside a prison. Malik is the central character who we see grow up. Whenever he is asked the question about who is he working for, the answer he gives is for himself. And that is what makes him stronger. He knows to keep quiet and observe. His silence becomes his strength.

As years pass by, he learns to read and write. With Luciani's main crew is either let out or transferred, he is forced to give Malik more responsibility. Malik not only takes this opportunity as his golden chance, but he also hatches a brilliant surrounding that helps him build his own name.

Prison makes Malik more stronger, independent. He gets chances he haven't got till now when he was in the outside world. He plays the game in silence, he is the most dangerous player. he talks with confidence, he becomes diplomatic. He uses honest answers to get inside the door.

A Prophet paints Malik's character in rise. When you first meet him, he was like a tortoise hidden inside his shell, as he puts out his face outside to see the world and get involved under these brutal yet luxurious circumstances he wins the game slow and steady.

It's Tahar Rahim portrayal as Malik El Djebena, brings the movie alive. He plays this character close to heart. The way he handles every situation he is put in, especially his first kill was just brilliant to watch. Tahar's face is expressive in a way that you can just watch him and know what he might be thinking to do next.

Even though it's Tahar Rahim's show all around, Niels Arestrup as César Luciani brings his own character showing his strength that helps Tahar's character rise up. Jacques Audiard plays with brilliance between these two characters.

Stéphane Fontaine's cinematography plays an exceptional role in telling the story. The dreams of Malik, the deer scene which Denis Villeneuve described, the shoortout scene in the car and the scene of Malik standing on the beach are exceptionally shot.

Un prophète aka A Prophet is brilliant character study that shows Malik who starts his school in prison like a primary student who learns and makes his way through graduate school with his intelligence and passes out with flying colors. It is original in its storytelling and it shows rather than making a person really rehabilitate within prison most of the times it just makes the prisoner more powerful.