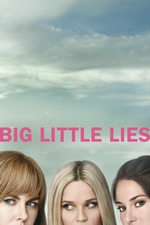 Set up in Monterey, Big Little Lies tells a story about 5 women, their lives, secrets, lies and a cold war between everyone.

Madeline is a strong willed woman, she is feared in these lands. On the orientation day she meets Jane, a single mother who has just moved to Monterey with her son Ziggy. They soon form a friendship. We meet Madeline's closest friend Celeste Wright, a retired lawyer with twin sons. Renata, a businesswoman who has a daughter Amabella who accuses Ziggy of attempting to choke her, which he denies. And Bonnie, current wife of Madeline's ex husband.

The story unveils slowly and steadily. From outside everything looks perfect. Everyone is rich, big houses, parties... but as you start to look closer there are wounds that have settled over years.

Madeline appears perfection which her eldest daughter kind of feels being pressured into something she doesn't want. Madeline gets angry at times when she finds out about her daughter being more friendly with Bonnie than her. Also when her ex husband starts to be good with Bonnie and be involved when he wasn't involved in their marriage. Madeline's current husband Ed is sweet and understanding.

Celeste's life looks like a dream...But it is nothing like a dream. As we enter Celeste's life, we see her husband Perry lashing our on her, beating her, arguing with her for small things. But everytime Celeste slides it under it feels so heartbreaking. I really wanted to beat the shit out of Perry everytime he even touched Celeste. But Celeste starts to own when she meets a therapist who makes her realize the reality of her relationship with Perry. Even the sex they both have is an outcome of both of their angers towards each other.

Jane is a single mother, we find her reason to moving to Monterey. I just can't...Sorry. Jane is strong, she is trying to build her new life with her son Ziggy. But after the accusation on the first day of school she starts to feel indifferent. But Madeline and Celeste help her. She even starts to get to truth on her own.

Big Little Lies is like an ticking bomb at times. It is thrilling, exciting, addictive and as each layer starts to peel off you see real people and how they are. I mean just see what the people tell to the police when asked questions about the town. Everyone is smiling and talking so sweet but in mind everyone is toxic.

There is a bond formation between Madeline, Celeste and Jane. A bond that can tell everything without any words to utter. A series where you see rich white people and their messy lives you tend not to care before you press the button Play, but the story is interesting. It shows how children pick up on their parents without knowing what they are doing.

Amabella hiding the kid who bite and choked her. Ziggy trying hide the secret. Promises are like crocodiles tears here.

It is about strong women, lives they lead, the bond they create, children they raise, people they love and hate, mistakes they have made, trying to rise above and finally be together with all the differences in the world.

Reese Witherspoon, Nicole Kidman, Shailene Woodley, Laura Dern and Zoë Kravitz are a powerhouse. Their performances are just brilliant. You got to watch it to know what I am saying here. It is going to be a tough competition at Emmy's this year and Golden Globes too. Reese, Nicole and Shailene deserve everything. They play their characters to perfection.

Alexander Skarsgård as Perry is a douchebag, asshole, swine, dirt bag...Everything curse word you can think of. But got to give it to Alexander for playing this role which everyone would just hate from the second he enters the frame.

Directed by Jean-Marc Vallée and Adapted from Liane Moriarty's novel of same name by David E. Kelley. These 7 chapters are explored with moment it all set in motion to the moment of the murder. Editing reminded of Jean-Marc Vallée's previous movies like Wild and Dallas Buyers Club, it is fast and swift and a soundtrack that matches the tone of the scene.

Big Little Lies is a perfectly crafted story with everything that can keep a viewer glued to his seat. With powerful performances from Nicole, Reese, Shailene, Laura and Zoe...You just can't ignore this one.

And seriously who approved that prosthetic penis for Alexander which looked more fictional than anything.