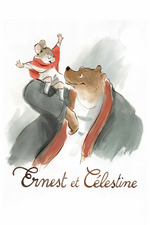 From the start of this lovely film we see Celestine a mouse drawing a bear and a mouse in his hands and imagining they can be friends, were they are told that bear's eat whatever they get their hands on.
There is a warden which all mice fear as she enters the hall we see all mice hiding and running and as she orders they go to bed and turn off their lights, she tell them the stories about the bear's who are despicable. But still Celestine doesn't want to believe this. I liked how the shadow of the warden was drawn as it looked how all the mice feared and looked at her.

Ernest who lives in a lonely house on a hill with a beautiful landscape covering the house. His house is messy, plates aren't washed for ages, everything is scattered here and there. But he can play music. He wakes up and first thing he do is look for food which isn't there as we look he is broke. He goes out with his instruments to make some money but his instrument is taken by police.

Celestine comes out of her home and visits a bear home where a kid bear has just lost his first tooth and mama and papa are explaining him about the mouse tooth fairy and Celestine is hiding in the toys listening to them and drawing the scene. It is beautifullt shown how Celestine is drawing her sketches, how the lines are drawn is perfectly captured. Celestine has to run as she has been caught by the bears and she falls in the garbage.

Ernest who looking for food looks in the garbage and finds Celestine and his first instincts kick in. He starts to eat her, but Celestine screams and stops him and takes him to a candy store to eat and she goes to her home. In her home she has to become a dentist which is prestigious occupation. She just found only one tooth that day, because of the mayhem. The teeth are needed to replace the mice teeth to become strong and useful for work. Celestine is thrown out and told to bring fifty teeth.

Ernest has been captured by the police and Celestine frees him for a favor to steal teeth from a dentist. Ernest helps her and Celestine brings that teeth, but the fairy tell shatters as Ernest is caught by the mice police and is being chased also Celestine for bringing him there but the problem becomes bigger as above the bear police is also behind them. They escape and go to hiding in Ernest home.

We see Celestine getting a nightmare and Ernest consoling her that it is not her night mare where next night Ernest gets a nightmare and Celstine consoles him the same. Ernest's home has hole above where he sleeps and small snow ball come and sit on Ernest's nose and he sprinkles. Celestine stays with him that nigh with a umbrella. That was beautifully taken. They also share a story of loneliness and dismissed of their talents. Ernest encourages Celestine to paint. They live a very sweet life in their own little universe. They play, draw, create music, laugh still they have problem of the police haunting them.

This film capture the essence of a great animation, with beautiful landscapes, characters, painting and the friendship. The music is very playful and makes us enjoy the movie even more. It is exceptional because it looks like a painting moving in a dimension of the animation.