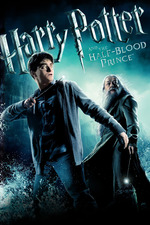 Whenever I start to write about this series, it always gets personal. My memories of watching every movie on the big screen to the books I used to read multiple times when I was a child. Harry Potter was a big part of my childhood and when you are studying in a Military School you need all the magic in your life to escape the reality and enter something entirely different that makes you accept who you are.

Half Blood Prince is the movie I have watched the most time on the big screen. 7 times I think. I love the book, the dark nature it had and going past in the memories of Tom Riddle and how he became who he was now. From his childhood we see what his intentions were. the conversations he has with Dumbledore when he visits Tom at the orphanage, you see how he tells what he is capable of.

It is always the choices we make define us rather than how talented you are. Harry Potter is different from him in many ways but most importantly he choices have defined him from the start. How he insists on choosing the house he wants or the courage he displays everytime there is some danger.

Half Blood Prince starts with Harry and Dumbledore visiting Horace Slughorn asking him to return to Hogwarts to teach Potions. But it is not as simple as it seems, Dumbledore wants something from Slughorn, a memory which he has altered that might be the one that shows the true nature of a boy who descended into the darkness as soon as he could.

The movie also presents the teenage part of life. The crushes, the loves, the angers, the silence and the longing. The only part where the movie has something bright to look for. It is humorous at times like the scene when Ron utters Hermione's name. Even the scene where Ron is eating and Hermione is worried as she hasn't seen Harry and she beats Ron with the book. It shows a part where even though there is a world where they had to be grown up and fight a war soon, they are also teenager who want a normal life in school.

Directed by David Yates, he presents this movie with a darker tone throughout. It represents the darker times that are coming soon. I loved the way the situation of Draco was handled. How he was showing he can do it but at the same time he was sacred shitless. I mean who wouldn't. When the time came when he is in front you can see his fear and tears trembling down.

Nicholas Hooper's score and Bruno Delbonnel cinematography play an essential part to the telling of this story. The performance from the trio had matured over the years. The essential part of this movie was the relationship between Harry and Dumbledore and the final thread for the viewers to see Snape taking the side.

Half Blood Prince has some changes from the books yet still for me it creates a different feeling. the novel itself is fantastic, the descriptions of scenes fro Rowling in the book itself create a image in front of you.

The movie tries to define very differently, from the mysterious Half Blood Prince to the finale where everything starts to fall into pieces and the way to the path starts. It is toned in darkness, it is visually stunning and emotional. It gave me chills when the reveal is done of Tom Riddle and what he asked of Slughorn. For me every Harry Potter movie is perfection and no one can take that away from me.