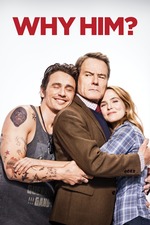 Ned is having his birthday with company and his family, we see his son Scotty give a presentation on who he is and how he is, but to Ned's surprise hid daughter Stephanie accidentally introduces her boyfriend Laird and invited her family to his place for Christmas to get to know him.

Laird is a millionaire in his world of apps and video games. He is honest, uses fuck a lot but his heart is always in the right place. I mean he is meeting the father of his girlfriend and you all know how it goes. there is a whole friction between these two. For Laird it is more about the bond between the family and with Ned as he himself never knew his father.

As we move on it just goes on onto impressing and trying to find dirt, etc. There is really nothing new if you are finding it. It is just the old school Christmas movie.

James Franco is over the top himself here, he personalizes his persona of cool guy here. Bryan Cranston plays the dimmed down version of Walter White, I mean there is nothing really for him to channel here. The reason I watched this one was because of Zoey Deutch, she is really beautiful here with her smile. She makes her presence here but it is not a movie to get something out of.

Why Him? is a traditional movie of a father and his No word for his daughters boyfriend. It is fun at times, but mostly is just goes on and ends.