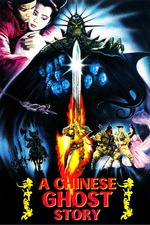 The production details are like a dated 1980's TV show and the narrative confuses as much as it entertains, but A Chinese Ghost Story still holds up as a fine piece of oriental cinema.
A peasant debt collector falls in love with a witch who lives in woods haunted by a tree demon who literally sucks the life force out of its prey. The film is equally an action-adventure and comedy just as much as it is a ghost story and feels like part of its inspiration came from Sam Raimi's The Evil Dead (qv).
Good fun, but utter nonsense.
6/10