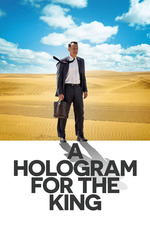 A Hologram for the King

Tom Hanks' most disappointing film in over three decades, especially in terms of box office receipts.
He plays a corporate businessman involved in a Saudi Arabian sales project which he aims to propose to the king, who always happens to be undertaking duties in other cities or countries. That's pretty much the crux of the joke to this fish-out-of-water culture clash comedy which moves with as much energy as jetlag.
It's no Lost In Translation, and if you think the title doesn't sound particularly interesting, the performances aren't much more immersive either.
4/10