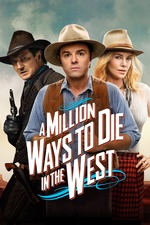 Seth MacFarlane's follow up to Ted is hugely disappointing, mostly because it simply isn't funny, at all, resorting to puerile fart jokes for most of its humour.
MacFarlane directs himself as a poor sheep farmer, low on confidence after being dumped by his belle for being the biggest coward in town. It doesn't take him long to find a new love interest though, unfortunately for him, she's already married to the most infamous gunslinger in the West.
The script to this film is really lazy, as though it were thrown together over a stoned weekend, with Seth MacFarlane putting his own character in practically every scene with all the other actors given absolutely nothing to do except drop in an F-word every now and then.
Charlize Theron tries, but her character is so weak, you simply don't care for the romance blossoming between her character and the lead.
Ted had a living bear which talks like Peter Griffin. This film has a cowboy version of Brian Griffin. Using modern day buzzwords and mannerisms in the context of a 19th century Western simply doesn't work. It's just lame.
The comedy would mostly appeal to young children, but the constant foul language and sex jokes makes it completely inappropriate. Blazing Saddles mashed up the comedy and western genres perfectly, this is mostly embarrassing, with more tumbleweeds than laugh out loud moments.
4/10