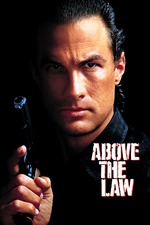 Action hokum with Steven Seagal which would be best appreciated by fans and bigger fans only.
A martial arts expert/cop uncovers corruption in the CIA. That's about the long and short of it.
It's a woodenly acted, preposterously-plotted action vehicle for Steven Seagal during the early days of his film career. It's not the best of his work, but it certainly isn't the worst either.
Quite fun if you're not expecting too much, but not particularly memorable and not really one to watch more than once.
4/10