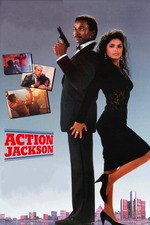 A maverick cop is framed for murder while investigating murders of union officials.
A ridiculous and formulaic action thriller with some highly questionable performances and a villain right out of a pantomime.
Carl Weathers was a decent supporting player in films such as Predator and the Rocky films, but he simply doesn't have enough charisma or screen presence to carry a film himself, even in an action vehicle as formulaic as this. It's not completely terrible, but you wouldn't remember too much about it after a couple of weeks.
4/10