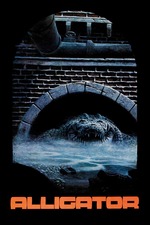 Jaws-style creature feature in which a pet alligator is flushed down the toilet and grows to become a giant mutant in the sewers before going on a murderous rampage.
It's all pretty laughable and can't be taken seriously, but isn't the worst of the spawn of similar movies which reared their heads following the success of Jaws. It might offer some entertainment for fans of cheaply produced horror schlock, but then again, it might not. See ya later...
4/10