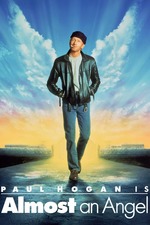 A rather lame attempt to capitalise on the success of Crocodile Dundee and its sequel, starring Paul Hogan as a petty crook who is convinced that he is an angel.
Unfortunately, it landed like a lead balloon in cinemas and failed to progress the Australian actor's career, who returned to type just over a decade later with a third Crocodile Dundee movie.
Almost an entertaining movie. There's not really much else to say.
4/10