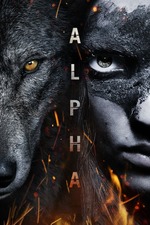 A twist on a typical boy and his dog adventure, set during the Ice Age, where Keda (Kodi Smit-McPhee) becomes separated from his family and tribe during a buffalo hunt.
He befriends an injured wolf and the two face and escape from a series of dangers as he tries to make his way back to his people.
The emphasis is certainly on visual spectacle in this prehistoric adventure which invented its own language for the minimalistic dialogue which is spoken throughout.
Style over substance would be a rather harsh summary, but it's fair to say that while it is visually splendid, the narrative is rather dull, making for a rather unmemorable movie.
6/10