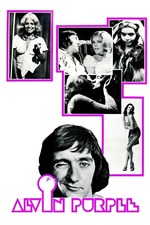 ALVIN PURPLE (aka THE SEX THERAPIST) (18)

A young lethario gets a job as a gardener in a convent in this crass sex comedy which was hailed as Australia's answer to Alfie.
It did huge business at the Australian box office but wasn't so well received elsewhere, possibly because it's not very good. Still, it generated enough income in Australian dollars to warrant a sequel, Alvin Purple Rides Again, released just a couple of years later.
4/10