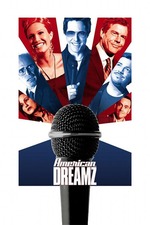 Supposedly a satire on both television talent shows such as American Idol & The X Factor and on US politics, which begs the question: who is this film supposed to appeal to?
The assumption must be that spelling the title with a Z is trying to appeal to a younger audience but the political references don't cater to them.
Hugh Grant plays a Simon Cowell-type judge on an entertainment programme to find the next new pop star and is joined by the US president (Quaid) as a guest judge. The whole thing is quite ridiculous and just seems to be a cash-in on TV shows which were popular at the time. A movie with no longevity whatsoever.
4/10