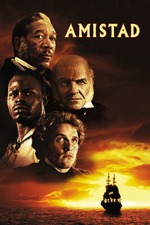 A Spielberg history lesson, traversing the line between facts and entertainment value with trepidation.
Prior to the abolishment of slavery, a group of captives mutineer a ship off the coast of Cuba and subsequently face trial in the US, where young, ambitious lawyer Matthew McConaughey must prove that they are of African origin and victims of illegal slave trade.
Much like the director's 2012 film Lincoln (qv), Amistad tells us much what we already know; slavery was an evil practice.
There's a handful of excellent performances, especially Djimon Hounsou as the slave who received the most of the focus in the film and Anthony Hopkins as former US president John Quincy Adams. The cinematography, production design and costumes are of the usual high standard you expect from a Spielberg movie, the biggest problem is that there's much preaching over a subject which hasn't been an important issue for the best part of a century, although, perhaps it's a subject which ought to be learned so that the dark history will never repeat itself. There's much better films which tackle the same subject though.
7/10