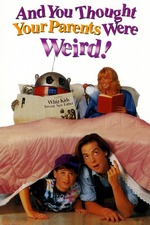 And You Thought Your Parents Were Weird!

"A comedy about modern creations and family relations" reads the tagline.
This twee family-friendly film sees two teenage inventors create a robot which becomes possessed with the spirit and voice of their recently deceased father following Halloween celebrations.
A rather humdrum sci-fi/fantasy comedy in the style that Disney would chuck out in the late 70's and early 80's (The Computer Wore Tennis Shoes), complete with some huge dollops of sentimentality crammed in towards the end. Overall, there isn't anything particularly remarkable to be seen here, it's just a timekiller.
Unsurprisingly, it went straight to video in the UK.
4/10

And Then There Were None